Is "Atlas Shrugged" the Movie...Too Late To Save Our Dystopia?

Has the United States devolved into a dystopia? I think the answer to that question is undeniable. http://en.wikipedia.org/wiki/Dystopia

The larger and much more operative question is, "Can we salvage our country or is it too late?"

Ayn Rand was a fantastic human being. She was I think, the kind of person I am always attracted to. Not because I agree with everything that she had to say, but because I understood the philosophy she employed in arriving at her conclusions. I find her philosophy and thus her conclusions, congruent.

Ayn Rand died when I was just a young man. The truth is, I didn't pay attention to her. I suppose she was just a little old lady then- practicing some blend of philosophy and economics which would not appeal to me until I became a little old man. I agree with most of her libertarian and laissez faire views; I adamantly disagree with her views on selfishness as a virtue and love. Interestingly, I agree with her reason and logic but not her conclusions. That would baffle Ms. Rand- I think.

That Paul Krugman hated Rand's masterpiece, "Atlas Shrugged" is reason enough to like her and her work. http://en.wikipedia.org/wiki/Atlas_Shrugged

In 10 days, the movie, "Atlas Shrugged" will be released. It has had an awful history. A history delayed perhaps in some cosmic coincidence that mandated the arrival of "Atlas Shrugged" to a world filled with dystopians who no longer read and who are barely capable of comprehending the subject matter in the manner in which it will be presented. The dystopians who don't understand this movie- are the ones who have made it possible.

You will love this clip. A young Mike Wallace smoking cigarettes and an unapologetic Ayn Rand telling the government to go fuck itself. I think she nails this dead on. Of all of the clips I have viewed, I like this one the best.

Had Ayn Rand lived long enough, she might have witnessed the de-evolution of the United States into the dystopia it has become. A country that lies to it's citizens by promising hope, and buys votes by delivering largesse in the form of welfare, subsidized housing, health care, student loans, unemployment, and food stamps. Collectivism will certainly relegate us to the dumpster of history.

The movie will be out in 10 days. From Boise with love. 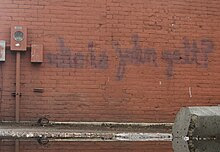 "Who is John Galt?" spray painted on a wall in Boise, Idaho, United States.
Posted by Brian at 4:19 AM

Maybe it's not too late, Brian. I have hope that this movie could change or, at least, awaken many people to what is happening to their country. Did you see my post on this about 10 days ago? You can find it here:
http://conservativesonfire.wordpress.com/2011/03/27/atlas-shrugged-_-just-another-movie/

Ayn Rand is to both literature and philosophy what coprophagy is to cuisine.

Even Woody misses the beauty of that clip. Rand is warning of creeping government control, media control, thought control, while Wallace is smoking a cigarette.

Wallace doesn't smoke in his interviews anymore, seems control got to him.

Think I'll have a jalapeño martini.