I have been looking for a concealable gun with more oomph than a 9mm. I have a beautiful little Kimber Micro 9mm with a built-in laser but it only carries 7 rounds.

It is a fine shooting gun, but it has three problems. With the laser that little gun is now running near 1000 bucks off the shelf. The other problem I have with the Micro 9 is that it is built just like a .45 caliber 1911. It is single action sans the back strap safety. So in a tense situation it will do as long as you remember to cock the hammer. I simply can't carry it cocked although it has an external safety. I am not a fan of the 9mm round in general. In a pinch, I want a gun that will fire just as quickly as I pull the trigger.

I set out to solve three problems. Find a concealable gun in the more powerful, .40 caliber. Increase the number of rounds. Do all those things inexpensively. That is how I landed on the Taurus G2C. I read a lot of reviews and I watched a couple of You Tube videos. Everyone seemed to like it. No jamming and a lifetime warranty. They also have a newer G3C but I stuck with the G2 because it looked smaller. I found it at Cabela's for 249.00. I also had 80 bucks' worth of points on my Cabela's card so buying this gun with tax was only about 180 bucks.

It comes with two mags which hold ten rounds each. It has an external safety, a chambered round indicator, and it comes apart very easily for cleaning. I picked it up a few days ago and took it to the range today.

The range was vacant when I arrived. Nobody was there, which is good because it's a bit on the small side. Since I was the only one there, I set my target up mid-range rather than the firing line. I am not going to be shooting a handgun from 50 yards away.

Just as I set up my target, the angry guy shows up. Now I've been shooting at ranges, many much nicer than this one, all of my life. Maybe 200 range days in all. This guy shows up and tells me to move my truck. No hello, no kiss my ass, no "how long ya got?" I told him I'd move the truck when I was through which was only going to be a couple of magazines worth of shooting, maybe 5 minutes if that. Then he tells me I am past the firing line and tells me to move my truck again. I said I know, this ain't my first time on a range. I am not moving shit until I am done. This pisses the rangemaster off and he started swearing at me because I would not comply with his demands.

So you know this wasn't going to turn out well. I cycled a couple of mags through and left.

The world it seems is full of assholes like this. I have gone to ranges and patiently waited for people to finish. I don't really want to shoot with strangers near me anyway. If this guy would have just STFU to begin with, I would have been done before he could even set up.

Yea I got his license plate number.

I went to another location without any assholes. My wife shot the gun and we cycled about 50 rounds through it. Wadcutters, copper jacketed rounds, and hollow points. It performed well. I took it home and cleaned it with four other handguns. It was easy to disassemble and clean.

I am going to buy a viridian laser for it which is another 60 bucks.

All in all, I've never been a Taurus fan. But this gun checks all the boxes for me. For 250 bucks it's hard to beat and it was pretty accurate. I'd recommend it. 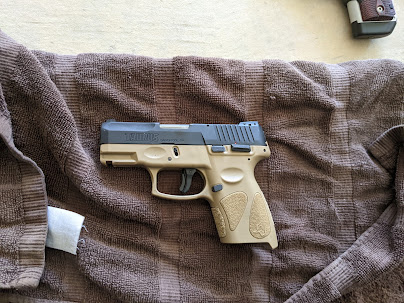