Nobody can blow Barack Obama's horn better than Barack Obama. Have you ever noticed how everything is always about him?

I did this. I did that. I got Bin Laden. My health care bill is here to stay. You see for narcissists, anyone else is insignificant. Narcissism is a serious mental disorder that involves extreme self centered-ness.

In Obama's case, one of the most severe, it may be terminal. http://news.yahoo.com/blogs/ticket/obama-health-care-law-passed-stay-165642552.html
Posted by Brian at 3:26 PM No comments:

Sunday morning arrived and it promised to be a scorcher. Today was Grand Canyon day. We were looking for 110 degrees. I exited my room and looked down the railing at Jason and Troy's room. There was Troy, in his shorts, smoking a cigarette outside. I have a photo of that but because this is a family blog, I have chosen not to present it here because I don't want to offend the two females who still continue to read this blog. From prison.

I have a couple of things I need to disclose before continuing on. First of all, it was my job to plan this trip. By the third day, we had already traveled 700 miles in blistering heat. So I miscued. I thought our trip in and out of the Grand Canyon was going to be 100 miles each way. I was wrong. It was 200 miles each way. This was not lost on any of us by Sunday evening.

The other item I want to mention is Troy. I love Troy. He is the original nutter. To call Troy obnoxious is a tremendous understatement. They simply don't have a word that describes Troy yet. Troy has an insane ability to say anything at any given moment. Funny shit always happens when Troy is around because he will pop off with some crazy unfiltered brain synapse, usually directed toward strangers which he accomplishes at a tone that exceeds 100db. If you are a reserved or controlled type of human being with good hearing- Troy will make you crazy. You will need benzos to survive.

Getting ready for the big day. 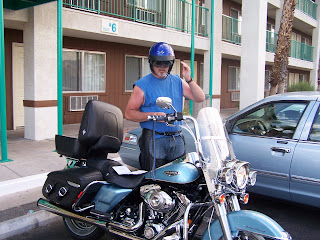 We were already saddle sore when we arrived at Hurricane, Utah. When the cashier at the gas station told me it was another 135 more miles to the North Canyon rim- I passed this information along to my two stoic travel companions. That's Troy expressing his love for me as I snapped the photo. 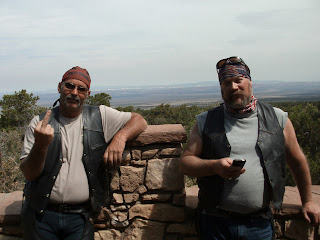 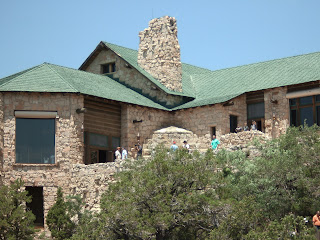 On our way into the park we passed a giant string of cars all doing the speed limit. We tend to think of speed limits as suggestions. Passing all of those cars turned out to be one of the most fortunate aspects of the day's ride. The government charges a whopping 25 bucks a car to get into the Grand Canyon. At that price, you'd think that the government had dug out the fucking Grand Canyon as a tourist attraction and was still trying to recoup their investment. At any rate, they had one of those little ranger station thingys where they steal your money because God knows, we don't pay enough in taxes already. The ranger guy in charge of the stealing was a man in his 50's with one speed. Glacial. As I watched him dink around with the two cars ahead of us for five minutes, I thanked God we had passed all of those cars which were now patiently idling behind us. When it was our turn, he informed us it was only 12 bucks per motorcycle unless we had additional passengers. I told him that Troy had his midget girlfriend hidden in one of his saddlebags. He didn't think that was funny. Maybe he just ignored me. So after stealing another 36 bucks from us which we can't write off- we headed into the park. That's a picture of the lodge up there. ^^ 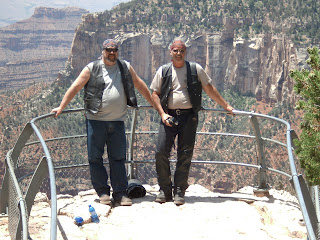 Once we had arrived at the lodge, we found these little trails that wind all around the canyon rim. As we walked around, Troy was popping off with virtually every stranger that crossed his path. He spotted a 16 year old girl walking on top of the rocks that lined a path we were on. As she approached us, Troy yelled "Hey get off the rocks!" She immediately jumped off, took one look at Troy, and jumped back on top of the rocks. I told Troy that the only way he was going to achieve any level of credibility was to tell these people he was an undercover park ranger. 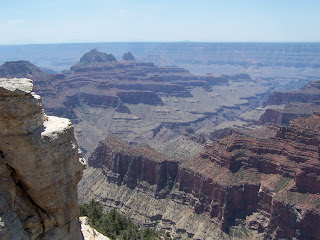 The Grand Canyon exceeded my expectations. Pictures just don't do it justice. It is huge, it is deep, it has beautiful colors, and it is gorgeous. The road in had an elevation sign that said we were at 8840 feet- which blew me away. I had no idea that we were that high- but the North Rim closes because of deep snow every year. So after a couple of hours of goofing off, we left. By the end of the day, we had traveled 1100 miles total. I actually had a heat rash on my ass with raised lumps.

That night Troy learned how to play Pai Gow poker. I think he liked it.

The next morning found Jason with a bad tire. We had to get a new one which set us a back a few hours in St. George, Ut. It was an all day ride for Troy and Jason from St. George through Salt Lake City and back to Idaho Falls. I peeled off in the direction of Wendover, Nv. I was so tired that I actually fell asleep on the grass in a rest area before reaching town. At Wendover, I was still 300 miles from home and my ass was seriously sore. I slept like a baby that night.

Every time I take one of these trips, I end up cursing it. I am beat up, tired, and sore. Today, I felt better. I took the RoadKing down to the car wash. I washed it, polished the chrome and the saddle bags. Sometimes, I just stare at that bike. Maybe next week, I'll forget about all this. It never takes long.

An Uplifting 4th of July Story

This comes courtesy of the Feral Irishman. I think you'll like it.

I often wonder what I'd do without a motorcycle. Probably live some sort of horrible and lonely life and  then drink myself to death. Thankfully, we have motorcycles.

So on Friday we set out on our Grand Canyon adventure. Jason, Troy and I. We have talked about this trip for three years. Two Road Kings and one Indian Chief.

It seems we always have challenges. Engine lights, tire failures. In some odd, perverse sort of way- I actually look forward to those obstacles. Once again, I was not disappointed. That's just how these big long trips seem to go.

We left Twin Falls on Friday- three hours late after an engine light slowed us down. The boys at Snake River Harley fixed a wire for free. We made Ely by 5 or 6 that night and stayed at the Hotel Nevada. The Hotel Nevada has these theme rooms with old country records lining the hallways. There are records in the rooms. Country records in display cases. I stayed in the Tennessee Ernie Ford Room also known as room 603. There were bikers everywhere. A huge group from Reno. We ate a giant prime rib dinner for ten bucks, gambled a bit, and worked out the travel plans for Sat. In the morning we had a breakfast that would have fed the African continent. Lots to like about the Hotel Nevada.

I think Troy said that Jason and he had traveled 442 miles our first day. I might have traveled a little less than that from Boise. We made the move from Ely to Mesquite on back highways. We found the little mining town of Panaca and we bullshitted with the owner of a gas station there. He gave us the best route to St. George and then Mesquite. In a little town called Enterprise- we were fueling up when some kid in a diesel truck next to us- made a mistake and filled his tank up with gas instead of diesel. He discovered the mistake before he tried to start the truck. After discovering what he had done, the young man told his father. The father very calmly and rationally said it was just a mistake and they mapped out a strategy for siphoning the gas out of the tank with several 5 gallon gas cans. I was in awe. No yelling or name calling. I thought to myself, had I done this to my father's truck as a kid, I don't think it would have gone the same way.

Thank God we didn't have diesel trucks back then.

We stayed at the Virgin River Casino in Mesquite. I did not find one virgin nor did I find a river. I did however, spot a bowling alley. I like to bowl. Secretly, I am a professional bowler. I just don't tell anyone about it. That way, I can say something harmless like- "we oughta bowl tonight, I haven't done that in years." This of course- is complete bullshit and lulls my adversaries into a false sense of security. They think, "wow I haven't bowled in years either" and so they usually agree to a few lines. Once the trap is set, I got 'em. The key for me is not strictly about beating the pants off everyone that I play- what's really important is that I get the opportunity to say things like- "You had me worried right up until I actually saw you bowl that first frame."

So the bowling championship was set. I was just getting ready to heckle my adversaries as soon as they finished bowling their first frame- when suddenly something completely out of the ordinary sent me into a tailspin. Jason stumbled and fell flat on his face as he pitched the first ball. It did not go down the middle. I cannot tell you the level of restraint that I had to muster to keep myself from howling with laughter. Troy and I pretended not to notice but the truth is- it's pretty hard to shrug off something like that because a fall from a guy the size of Jason + ball can measure somewhere in the 4's on the Richter scale. It's hard not to notice that type of complete collapse unless of course you were in a coma and your family just happened to wheel you into the bowling alley for some fresh air about then. I think the pressure got to Jason early.

So I didn't say anything at that point. Troy and Jason managed to hang in the competition during that first game. They started leaking oil during the second game and their doors completely fell off during the third game. I mentioned that I barely squeaked a win out by a paltry150 pins. Oddly, they did not want to bowl anymore with me after that. That evening we had dinner, gambled, and went to our rooms. The next day was Grand Canyon day.
Posted by Brian at 11:42 AM 1 comment: