If it wasn't for the rain and clouds, the atrocious cost of living, traffic, taxes, shitty jobs, gobs of people, and most of them statists- it would be a great place to live. I mean how can you knock a place that passes helmet laws for bicyclists, bans smoking in public places, and requires anybody that gets into the water- to wear a life vest? I mean, how did mankind survive prior to King County? Luck, mostly. http://www.seattlepi.com/local/article/King-Co-requires-life-vests-for-swimmers-1432255.php

I haven't been to Seattle for a few years. So what I thought I would do here is let some of you people in on a little secret. It's how stupid ideas get traction. For years, I used to sit in on city council meetings and county commissioner meetings in Hailey- a geographic area which I lovingly refer to now as Moonbat Valley. Every once in awhile, some "yay- hoo" would come in with a ridiculous idea during the open business part of the meeting. Often, council members would dismiss these awful ideas while acting all concerned and nodding solemnly but every once in awhile, one of those shitty ideas would actually get a little traction- particularly if it was some green idea like outlawing idling cars or fining people for not picking up dog poop on the bike path. Statists love to hear ideas about criminalizing some act of human conduct that does not effect them.

This is the micro managed world that we live in. So I was not shocked to see an entire herd of goats fenced in and underneath several highways near downtown Seattle. The goats are there to eat weeds. Clearly this is a far more efficient way of clearing weeds than sending in 10 or so lazy parks workers or  a few inmates. Instead, some goat herder guy in a trailer sits there for days and weeks, until the weeds have been eaten by the goats. This is one of those silly ideas that not only found traction for some unspecified reason (err, collective bargaining) but it is probably much easier to expect some measurable, attainable results from goats rather than expect much from unionized city employees.

So how much does it cost to rent a herd of goats for a couple weeks? Apparently, that part of the goat story is missing. Do they send out invitations for bids from competing goat herders? Just listen to the unidentified moonbat in the news video selling the goat idea. That's how this stuff gets done. Goats save human lives.  http://q13fox.com/2013/06/24/goats-hired-to-gobble-down-seattles-toughest-brush-stickers-and-all-yum/#axzz2XT3ORFCA

I am almost afraid to talk about this. Once when I was a kid, I agreed to pull out all of the weeds in a vacant lot for 20 bucks. This was in the days before weed whackers. After two hours of solid work and bleeding hands, I lit the lot on fire. Those weeds were gone in 30 minutes at about the same time the fire department arrived. The owner stiffed me. What I wouldn't have given for a herd of goats back then.

Moments before this picture was taken, I saw a sanitation worker sweeping around a trash can with one of those dustpans with the long handles. He spotted a syringe. Rather than sweep it up, or don some rubber gloves and pick it up, he swept it under the trash can and called someone else to pick it up. I think he called it a "signal 6" or some silly shit like that. Apparently, a specialized Seattle trash-hazmat team has to come over and get it. This is union labor at it's finest. I was tempted to push the trash can over and grab the syringe- just to cause some sort of urban ruckus but there were a couple kids with me and I was on my best behavior.

Now I wanted to mention a sign that I had spotted on a Seattle light pole close to the goat herd. It was a no walking sign- you know the kind with a big red slash through the pedestrian guy. It was mounted right over a sidewalk of all places- and obviously it was there to protect me from something. It was a harrowing experience walking on that sidewalk, knowing that death could visit me at any moment. I survived despite my poor judgment and I had hoped we could put the picture of that sign in here but on second thought, maybe I am better off not posting that picture. If I confess to the crime of illegal pedestrian, the City of Seattle might just send me one of those mail in tickets.

From the goat herd we ventured up a couple of blocks.

We went to the fish market where they throw the fish around. This is cheap entertainment and so we watched some fish getting tossed about, bought a bunch of cinnamon rolls and other nutritious things, and headed up to one of the eighteen hundred Starbucks coffee shops in Seattle.

That's when I spotted this guy. He was looking for an "all season" woman. For those of you who don't know, an all season woman is a woman that keeps you warm in the winter and provides shade in the summer. There are also "all season men" but he wasn't after one of those. Please note the excellent penmanship and artistic design on his sign. I gave him one of those flattened out cinnamon roll thingys in exchange for this photo. 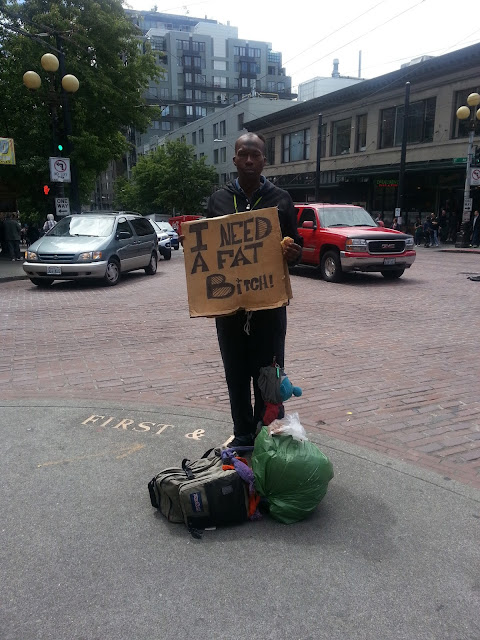 I probably sat outside of the Starbucks and watched this guy for 20 minutes. I was in awe. He was dead serious. I had never contemplated this direct approach to dating, and I could see some drawbacks. I probably would have included an age range just to weed out some of the older ones.

In Moonbat Valley, I could have busted this guy in the old days. I think his sign is non conforming with respect to our sign ordinance. If nothing else, we could have debated it for an hour and a half along with all of the other important stuff we used to talk about in staff meetings.

Yesterday, we traveled home. Unlike the trip up to Seattle, I did not attract the attention of one state trooper on the way home. Boise it seems, is behind the times. Our cost of living is right at the national average. Our taxes are pretty low. We don't have to wear bicycle helmets while riding our bikes or life preservers when floating down the Boise River. We don't have any weed filled lots strewn with hundreds of syringes and I haven't seen any goats east of Nampa. The only real statists live on the north end of Boise and I don't see them anymore now that I have relinquished my socialist YMCA membership.

Maybe I need to go to a council meeting or two to remember how it was.

This Snowden thing just gets funnier and funnier.

Now even Ecuador is giving the U.S. the finger. Seems the world's caught on to us. I giggle every time I think of Obama going on that worldwide apology tour in 2009- and then changing absolutely nothing- from closing Gitmo to allowing drone strikes.

What Kind of "Coward" is Edward Snowden?

The best Edward Snowden read on the intarwebs. I think you'll like it.