Biden Doubles Down on Stupid, Now Going For Broke

A mere 9 months into his stolen presidency, Joe Biden has already shown us what a special kind of idiot he is. And it's not like he was fully equipped to begin with- what little sense he had seems to be circling the drain.

Joe Biden is a fool and an idiot. As a President he is a complete disaster.

Then there is his kid. This kid is a full blown criminal. Not only does he solicit bribes and funnel part of the loot to his father- he leaves an old laptop behind in a shop somewhere with all the incriminating evidence on it. Besides bedding strippers and smoking crack, Hunter's IQ seems to have seen little improvement over the man who sired him. Of course he will never be prosecuted in this banana republic we've become.

Then there was the Afghan military disaster wherein Biden pulled the military out of Afghanistan leaving all sorts of people at the mercy of the Taliban. Many were killed. He ordered some sort of drone strike and managed to kill some women and children and never did disclose who the intended targets were.

Yesterday, our brainiac President has called for forced vaccinations of all federal employees (except 600k postal workers, go figure!) and is targeting companies with 100 employees or more to force vaccinations on their employees.

It's no wonder in our corporate run country that Biden thinks he can pull this off, but I will say this. If he really thinks he can do this- the apathetic conservative side of our political ledger are about to recognize their hill to die upon. You can only push stupid so far.

This matter, forcing vaccinations on people, has been litigated previously. The government lost.

Perhaps Biden thinks he can force vaccinations on everyone. This piece asserts the President might have the authority to force vaccinations on the military (and I truly doubt that) but it doesn't say squat about the public at large. https://www.cidrap.umn.edu/news-perspective/2004/10/court-ruling-again-stops-anthrax-shots-us-soldiers

It's hard to imagine anyone being this careless or stupid. We know the guy plagiarized and cheated his way through college and still landed near the bottom of his class. We all knew people like this.

But I never thought I'd see one running the country. 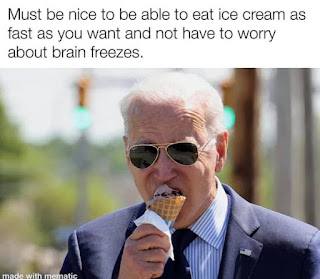