The Gold Market and A Logical Explanation

This is a FG exclusive.

As most of you know, I follow the gold market. I have some interests and investments. Because of this,  I have noted something crazy in the gold markets which is worthy of passing on.

Here's the quick summary. I'm not going to post links, because I would have to embed 10 or 12 so you are just going to have to take my word that what I say is generally accurate.

In mid 2011, Venezuela demanded that 160 tons of gold be repatriated and it was. The corresponding gold price dropped from 1900 levels to 1500 dollar levels.

In Oct. of 2012, Germany demanded that their gold be repatriated. Although they asked for 300 tons from the United States- we could not deliver. In fact, all Germany managed to get back was 5 tons and Germany said the gold it received was not the same gold that it had delivered decades ago. The corresponding price in gold dropped from 1500-1600 levels to 1200 dollar levels.

In Jan of 2013, just 3 months later and probably less, the Dutch secretly requested and received 122 tons of their gold which was returned to them from the US and delivered to the Netherlands. Unlike the Germans, the Dutch kept their request from being made public.

In Feb of 2014, the Ukraine (which we are defending) airlifted all of it's gold and traded it for US dollars. That was about 33 tons.

Oddly, throughout all of this- with worldwide debt levels and currency printing increasing rapidly in every industrialized country- gold has somehow found itself in a 3 and a 1/2 bear market. At a time when the demand for gold has never been higher, with increasing debt levels and stealth inflation, gold inexplicably is worth 700 bucks less than it was in 2011. I think there is an explanation.

With worldwide debt levels increasing and money printing going on in every industrialized nation except the Eurozone, gold market players correctly went out and bought gold- hedging against the inflation that would occur as result of all of that. The momentum players piled in- driving the price of gold to 1900. When no inflation materialized, the gold market collapsed. That's not to say that JP Morgan and other bullion center banks did not manipulate gold lower in order to deliver it to the countries that wanted it. In fact, I am sure they did.

All of that money printing and QE was unprecedented. People expected inflation to immediately ignite and it did not. Currently it is just smoldering.

I consider gold's run to 1900 in 2011, a slightly overbought level. However, I believe that the true value of gold with all of the rising debt levels and QE programs going on since then is probably around 2200. I believe the true value of silver should be around 60. Remember this is priced against a bankrupt currency which has no value.

I think we are in the eye of the hurricane. We are in the midst of commodity deflation with a wildly overvalued and inflated stock market. When we leave the eye of the hurricane and the world realizes all of their paper investments are worthless and the stock market bubble bursts- you will see the greatest rush into precious metals that has ever been seen. I believe the rise in those markets will be unprecedented.

It is only a question of when. The chart, one last time. 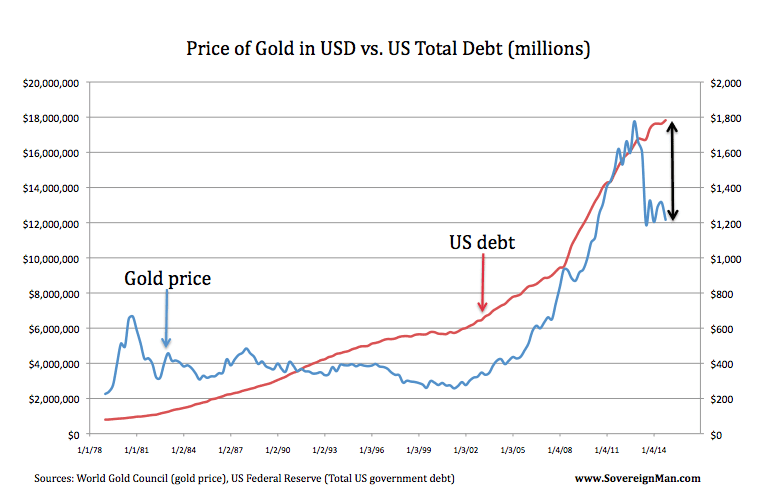 Have you seen this?

Agree as I've followed this history as it unfolded. 2008 was only a speed bump. The tires get ripped off in a ditch soon. To be honest I'm looking forwards to it because those arrogant federal and state employees that ruin peoples lives with their redundant oppressive bullshit word statutes need to get theirs. I hope they all starve.