About a month ago, I bought a beautiful blue suede and chrome Harley Davidson Road King. Initially, this was a looking bike, not a riding bike. I stared at it a lot. After a week of so, I actually decided to take it out and ride it. It does everything I ask of it. If only God made women this beautiful and obedient- life would be perfect. Free of divorce court. Blissful and serene. 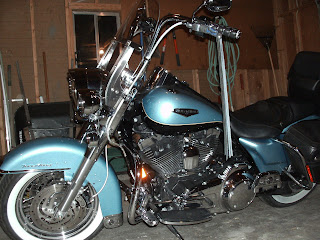 Last week, the goofball asks me how old I am and I tell him that I am 50. He says he was watching an episode of Beavis and Butthead. On that particular episode he said, Beavis and Butthead had decided to be kind to old people that were about to die. That way, they surmised, when these old people died they would leave them money and stuff for all of the kind acts and chores that they did for them before they croaked. So the goofball loves the Road King. Each day he asks me if he can come to my house and do some chores. Then he laughs like a hyena. Today he sat on the bike smoking a cigarette and asked if he could start it. I told him to get the fuck off the bike.

Maybe, I tell his smart ass, I will outlive you. He doesn't laugh as hysterically when I say that.

Maybe like Clint Eastwood in Gran Torino, I will leave him the Road King. Maybe I will have him come over tomorrow and haul some firewood into the basement. Next to the stove. Neatly stacked. Maybe I can talk him into this for the next 30 years or so.
Posted by Brian at 11:44 PM

Thinking small.
If you were thinking big you would have him voting for your re-election.