Bush-Clinton-Bush-Obama and 24 years worth of banker congressional lackeys. Give them all credit. Each of them had a hand in this mess.

How can a Rhodes scholar, two Yale grads, a Harvard grad, and 24 years worth of lawyers masquerading as Congressmen- all conspire to turn our country into a Banana Republic?

Aren't these people the best and the brightest? No, quite clearly they are not. The last great President that this country had was Ronald Reagan. And you know what made him really great? The thing that he possessed that none of these other shitbags even think about? Well aside from the fact he apparently had a better education from Eureka college...

He had vast amounts of moral courage- and values. He talked about the decay of the American family. He pulled us out of one of the worst recessions ever. Was he perfect? No of course not...but compared to the last 24 years worth of "leadership" Reagan looks like pure genius.

I swear to the Almighty, I will not vote for one more piece of shit lawyer or elite banker. Vote well or not at all.

More on the latest food stamp President from the Wall St. Journal.

Don't be fooled by the headline unemployment number of 8.1% announced on Friday. The reason the number dropped to 8.1% from 8.3% in July was not because more jobs were created, but because more people quit looking for work.
The number for August reflects only people who have actively applied for a job in the past four weeks, either by interview or by filling an application form. But when the average period of unemployment is nearly 40 weeks, it is unrealistic to expect everyone who needs a job to keep seeking work consistently for months on end. You don't have to be lazy to recoil from the heartbreaking futility of knocking, week after week, on closed doors. 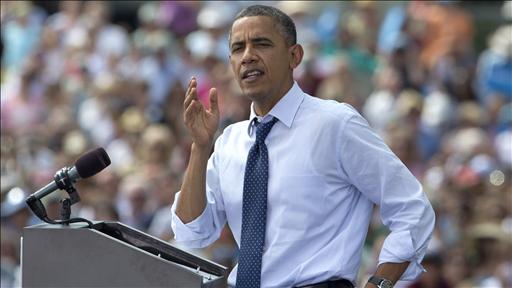 Assistant editorial page editor James Freeman on the August jobs report and how it gels with President Obama's speech last night. Credit: Associated Press
How many people are out of work but not counted as unemployed because they hadn't sought work in the past four weeks? Eight million. This is the sort of distressing number that turns up when you look beyond the headline number.
Here's another one: 96,000—that's how many new jobs were added last month, well short of the anemic 125,000 predicted by analysts, and dramatically less than the (still paltry) 139,000 the economy had been averaging in 2012.
The alarming numbers proliferate the deeper you look: 40.7% of the people counted as unemployed have been out of work for 27 weeks or more—that's 5.2 million "long-term" unemployed. Fewer Americans are at work today than in April 2000, even though the population since then has grown by 31 million.
We are still almost five million payrolls shy of where we were at the end of 2007, when the recession began. Think about that when you hear the Obama administration's talk of an economic recovery.
The key indicator of our employment health, in all the statistics, is what the government calls U-6. This is the number who have applied for work in the past six months and includes people who are involuntary part-time workers—government-speak for those individuals whose jobs have been cut back to two or three days a week. 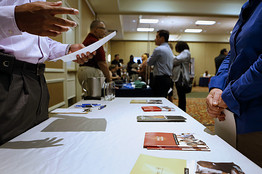 Bloomberg A recruiter, left, talks to a job seeker during a career fair in Houston in August.
They are working part-time only because they've been unable to find full-time work. This involuntary army of what's called "underutilized labor" has been hovering for months at about 15% of the workforce. Include the eight million who have simply given up looking, and the real unemployment rate is closer to 19%.
In short, the president's ill-designed stimulus program was a failure. For all our other national concerns, and the red herrings that typically swim in electoral waters, American voters refuse to be distracted from the No. 1 issue: the economy. And even many of those who have jobs are hurting, because annual wage increases have dropped to an average of 1.6%, the lowest in the past 30 years. Adjusting for inflation, wages are contracting.
The best single indicator of how confident workers are about their jobs is reflected in how they cling to them. The so-called quit rate has sagged to the lowest in years.
Older Americans can't afford to quit. Ironically, since the recession began, employment in the age group of 55 and older is up 3.9 million, even as total employment is down by five million. These citizens hope to retire with dignity, but they feel the need to bolster savings as a salve for the stomach-churning decline in their net worth, 75% of which has come from the fall in the value of their home equity.
The baby-boomer population postponing its exit from the workforce in a recession creates a huge bottleneck that blocks youth employment. Displaced young workers now face double-digit unemployment and more life at home with their parents.
Many young couples decide that they can't afford to start a family, and as a consequence the birthrate has just hit a 25-year low of 1.87%. Nor are young workers' prospects very good. Layoff announcements have risen from year-ago levels and hiring plans have dropped sharply. People are not going to swallow talk of recovery until hiring is occurring at a pace to bring at least 300,000 more hires per month than the economy has been averaging for the past two years.
Furthermore, the jobs that are available are mostly not good ones. More than 40% of the new private-sector jobs are in low-paying categories such as health care, leisure activities, bars and restaurants.
We are experiencing, in effect, a modern-day depression. Consider two indicators: First, food stamps: More than 45 million Americans are in the program! An almost incredible record. It's 15% of the population compared with the 7.9% participation from 1970-2000. Food-stamp enrollment has been rising at a rate of 400,000 per month over the past four years.
Second, Social Security disability—another record. More than 11 million Americans are collecting federal disability checks. Half of these beneficiaries have signed on since President Obama took office more than three years ago.
These dependent millions are the invisible counterparts of the soup kitchens and bread lines of the 1930s, invisible because they get their checks in the mail. But it doesn't take away from the fact that millions of people who had good private-sector jobs now have to rely on welfare for life support.
Posted by Brian at 12:41 PM

Great post! This is the Brian I know and love. I'm convinced that Obama¡s plan is to find about 600,000 loyal communists to quit their jobs this month so he can get the unemployment rate down to 7.9% just before the elections.


*Paradoxical Quote of The Day From Ben Stein*:

"Fathom the hypocrisy of a government that requires every citizen to prove
they are insured... but not everyone must prove they are a citizen."

Now add this, "Many of those who refuse, or are unable, to prove they are
citizens will receive free insurance paid for by those who are forced to buy
insurance because they are citizens."