The Sons Of Miners

Next week on Jun 8th at the Butte Archives there is going to be a lecture about the greatest hard rock mining disaster that had ever happened up until that moment in time- Jun 8, 1917. So I thought I'd edit and re-run this old piece from 2010.

This is an old story. It is about an agreement that I made some forty years ago. An agreement I made with my friends and the effect it had on my life as I got older. It is about loyalty, blind trust, and misconceptions. I told this story recently and as I reflected back on it, I realized it was an indoctrination. It was not necessarily true or untrue. But we believed that it was true. It was a choice we made. We were just kids, many of us, the sons of miners.
I wasn't the son of a miner. In the 1900's, Butte, Montana was known as the richest hill on earth. The city was bustling and busy- a stark contrast with today. A huge open pit mine had replaced underground operations but I can still remember the electric whirr and creakiness of a head frame near my childhood home on Caledonia as it spooled cable up and down the shaft. It is a kind of haunting sound which I have never forgotten nor heard again.

The city was primarily Irish, but there were other ethnic backgrounds represented- complete with homegrown cuisine with bizarre sounding names, neighborhood bars, and a few brothels. Most of my friends were Irish just like I was. I felt this weird sense of loyalty to my friends as though we had this common bond and whatever they said, simply had to be true.

The sons of miners told me this. There had been a great underground fire later dubbed the Granite Mountain fire. Although it had happened during the time of WWI, the story had been passed down to my friends by their grandfathers. The fire had claimed 168 lives, many of them brave men and Irish. There were very few safety measures in 1917. Men toiled long and arduous hours, made very little, and were treated like slaves. Many men had been killed in the mines since that time. After the great fire, there had been a long and nasty period of labor unrest, people had been killed including cops, sympathetic to the mine owners. Eventually at great cost and human suffering, the first miners' union was formed. They told me that all of this death and destruction could have been avoided. I was then introduced to the villain, the Anaconda Mining Company or in Butte, "the company." Making millions a month and screwing over our Irish grandfathers who toiled for three dollars a day. The company owned the local newspapers. So when people died in those mines, even in the 60's, they dared me to find an obituary that ever said that. I never did. 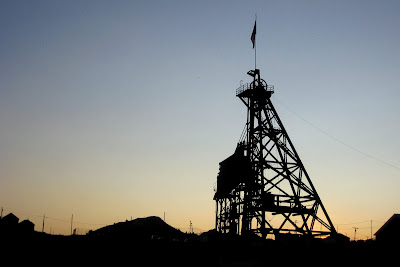 I saw my Irish friends as heroes. Struggling against greedy and powerful men who could care less if people had to die while ignoring costly improvements in working conditions. Rich men needing banisters made of wood imported from India or stained glass from Italy. I was loyal to those sons of miners. They were my friends. We were in this together. I began to hate the rich. The rich represented all that was wrong with the world. Unions and the working class were my heroes and my friends. Anyone with money, well they just had to be bad people. That is what I believed. I mean I believed that with all of my heart to be true. I was 11 or 12 years old.

There is a real danger in making agreements like that. You carry those beliefs the rest of your life. They are emotionally planted in you and buried so deep that you can't understand why you feel a twinge of hatred when someone drives by in a Porsche or lands a personal jet on the runway. You see, they are all mine owners to me. Oppressive and uncaring people who must acquire what they have at significant loss to the rest of us. To this day when I hear someone praising personal wealth, I get sick to my stomach. Because I made an agreement, many years ago, to hate those kinds of people.

It would take about thirty five years for me to rewind that tape. It took all of that time for me to reach back and wonder just why I held that faulty belief system so long. How simplistic that all seems now. Those preconceived notions I held as a kid and which I applied to anyone including the people who worked hard for their money and earned it. They could not have known. That is how I saw the world. It was judgmental and wrong perhaps, too broadly applied and stereotypical. I know that now. I didn't know all of that as a child. I saw it as a fact of life which was sprinkled with the loyalty one has for his friends and the hatred we have for the antagonists in our lives. Despite all of that, the bigger part of me will always be a miner's son. That I think- will never leave me.

On the 99th anniversary of the Granite Mountain/Speculator disaster- Jun 8, next week- there is going to be a lecture at the Butte archives which is scheduled to start at noon. All that remains to be seen is whether I will arrive in Butte by car or by motorcycle. I booked a boutique room at the new Miner's Hotel in the old Miner's Bank building. I can hardly wait.
Posted by Brian at 8:34 PM

What a beautiful story. I know it well. I grew-up in the shadow of the smokestack of Fisher Body I in Flint, Michigan. Both my parents were UAW members as were the parents of all my friends. My father often talked about how he participated in the sit-down strikes that brought the UAW to life and how they were brutally attacked by Pinkerton guards. Yea, I know your story all to well.

BTW, please see this story at Atlas Shrugs where Obama has admited that he is a Muslim to the Foreign Minister of Egypt. See it here
http://atlasshrugs2000.typepad.com/atlas_shrugs/2010/06/-obama-tells-egyptian-foreign-minister-i-am-a-muslim-stealth-coup-on-the-white-house.html