A couple of days ago, some kid comes to my door trying to sell me one of those home alarm systems.

He had no idea who he was talking to. But I liked the kid so I invited him in. Sales pitches always have the same scripted components. The first thing salesmen do is try to create a need for whatever it is that they are selling. So I had to listen to the part about the burglary that happened only a block away from my house last week. It sent chills up my spine.

If I really wanted to mess with this kid I would have asked him a bunch of pointed questions about that burglary- knowing full well he would not be able to answer them- but I liked the kid. So I let him run a bit with the script. They were going to install the alarm system for free... in exchange for putting a sign in my yard. Yea sure. Anyway...I finally had to stop him. I said kid there is nothing in my house worth dying for and I'll stack my preparation and skills up against most idiots short of a tactical team.

Today, I saw this and stole it. I love the west. 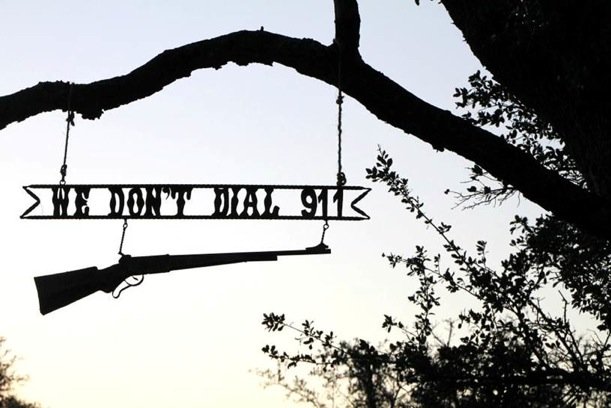 That would keep me out uninvited.